Coffee Chat on May 17 at 11:00 AM EST: Successfully implementing self-service within an organization

Here's what I expect from ticket merging: all timestamped interactions are shown in their original sequence. So, if I merge two or three tickets, I expect a larger single ticket that maintains an exact chronology of all the interactions, because two different tickets may have overlapping interactions.

However.. what seems to me that is happening in merging, is that one ticket is simply *added* to another. And I expect *intersection*.

Or am I getting things wrong? All I know is that merging in OTRS just works and makes sense, and after moving to FD I get headaches when trying to make sense out of merged tickets! Is it just me?

Agreed.  I've merged tickets & while it shows that they have been merged, when I go to my "All Tickets" view I still see all of the merged tickets listed separately.  The tickets that merged should not show in the ticket view list - they should only show in the ticket they were merged into.  Is this just Freshdesk being slow or is this an error?  Merging tickets is supposed to take you from multiple tickets to just 1.  That 1 should be the only ticket you see anywhere in Freshdesk - except of course, in that ticket's history.

I wholeheartedly agree with both Rodrigo (on merged ticket chronology, which is a complete mess) and Samantha on (on the fact that merged tickets still have lives of their own).
Freshdesk Support:  I believe an entry of mine (https://support.freshdesk.com/support/discussions/topics/304867) should be merged with this ticket, as it describes the same issue.

Hi Freshdesk, Any news on this?  I'm merging tickets this morning and this is really really bad -no-one could make sense of what happened with the customer and in what order.

Wow, this is really bad indeed. 2yrs and no fix???

I am also one of the users that need this. If possible, I would prefer to have an option for how tickets are merged, as in the following image: 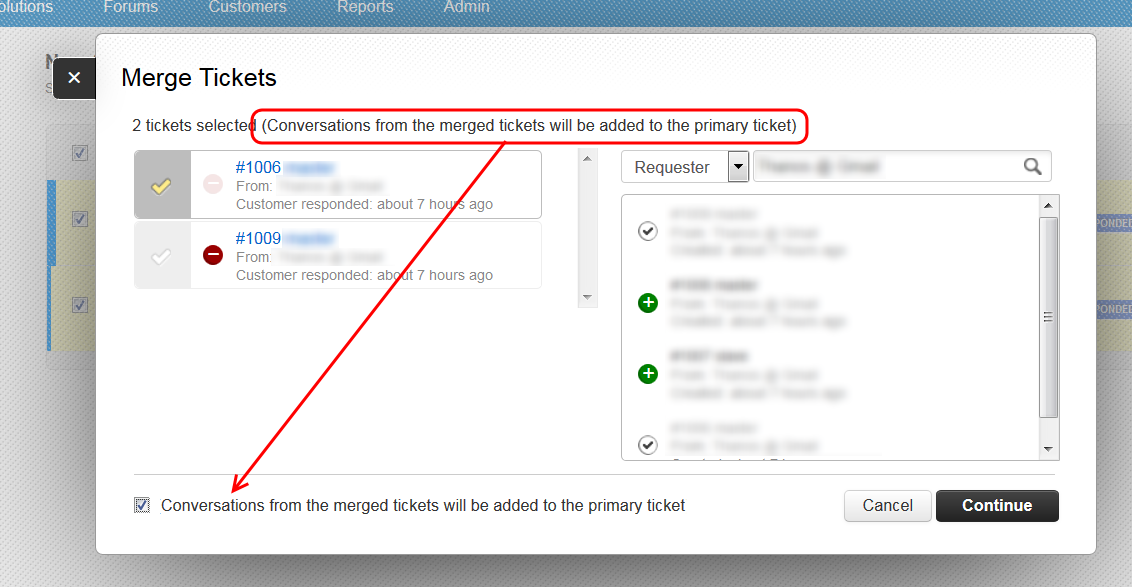 BTW, the current appearance the comment 'Conversations from the merged tickets will be added to the primary ticket' is misleading.

This is absolutely terrible. "Messy" is an understatement. Not only do merged tickets simply appear one after the other (regardless of the chronology of the interactions they contain), in many cases the order of the interactions within a single ticket gets muddled.

For example, I merged two tickets as follows:

Upon merging Ticket 456 into Ticket 123, the end result was:

This is not only unhelpful - it's actively confusing and results in terrible customer service.

What I have noticed is that out of the 2 private notifications added in the "master" ticket, one should, in my opinion, have a different timestamp:

The private note with content "Ticket with id 4598435 is merged into this ticket." is correctly added with a timestamp that shows when the note was created ( i.e. when the merging happened ).

The private note with content "Merged from ticket 4598435" plus the contents of the "slave" ticket request is also added with a timestamp that shows when the note was created ( i.e. when the merging happened ). I believe that this note should have the timestamp of the original ticket request of the "slave" ticket and also have some extra div class qualifier: <div class="commentbox commentbox-gray private-note original_request_copy"> Doing this, will make the timeline look more consistent and there will be a way to make that note more visibly distinguishable.

In my opinion, ticket merging in Freshdesk has improved greatly in the past few months.

Freshdesk anything in the road map to further improve merging? There are still issues and work to be done here. Merged tickets should not be shown in the recent tickets or tickets of a customer. It is extremely confusing to agents. Merged tickets should instead be properly positioned into the parent ticket. Also, in another conversation we talked about the ability to report on Merged Tickets.
H

Really sorry for keeping you all in the dark regarding this feature. We've made some major changes to the merge functionality in the last few months which should've improved it's performance. Having said that, we agree it needs more improvement. We've consolidated this list and sent it across to our product managers. We'll make sure to keep this thread updated once we hear back from them.

I just merged two tickets, and I have lost all the detail of the
"sub-ticket."  Under both the original ticket number and the new master ticket, I have only the original message that was used to create the merged
ticket and a note indicating that it was merged.  The other 10 messages
in that thread have apparently vanished.

I will open a ticket about
this, but I thought I would mention it here.

Guys this is STILL terrible!

I just merged two tickets. It was a really simple one - all of the ts from the second ticket were added in reverse order.

Now if you read the ticket from top to bottom, it goes:

All of the posts in ticket 1 were posted chronologically earlier than those in ticket 2, so there shouldn't be anything complicated here!!

While this gets sorted out, can we PLEASE have the functionality to MANUALLY re-order posts within a ticket? This is a nightmare!

This is awfully confusing, because Freshdesk encourages people to start reading threads from the bottom.  Anyone reading that "last" message in the thread.will assume that there were no responses to it  Or --- if the reader knows that there really were responses -- may assume (as I did) that those were somehow lost in the merge.

I recently have a trial FreshDesk and spent some time on the merging. Many people (including me) think that the merged tickets should NOT have lives of their own.

But consider the following imaginary case.

I have Ticket A and TIcket B created by two different customers by email.

An agent responds to both tickets, so both customers receive an email.

Next, ticket B is merged into Ticket A. Assume that Ticket B would disappear on this merge.

Now imagine that the customer of Ticket B would reply to his email he received earlier.

How could this work? Because Ticket B is gone, there is no way for the system to relate that incoming reply (which originated from Ticket

From what we've observed, there are few issues with the current merge option:

We'd love to hear your thoughts on this :)

I'm surprised this thread isn't commented on more often as merging is one of our biggest headaches. Here are my thoughts:

1. I wonder if a status of "Merged" would help? That way, those tickets could be filtered out of views.

vandegoor I also have same question regarding this scenario.

Honestly, for me the best solution is to no longer merge tickets and just add a note that the ticket is a continuation of another ticket. There are too many problems:

* Merging a new ticket with incoming e-mail to an older 'closed' ticket does not open the older ticket, it stays closed unless you manually open it

Too much manual handling for me... I'll keep the tickets and add a note with a link to the other ticket, close the existing one and go on in the new one.

(All Freshdesk reqally does when merging a ticket: Add a note with a link and copy-paste the new ticket in the other one in a note)

We are also struggling with the fact that merged tickets are actually not merged but linked together. The biggest pain point is for reporting purposes, for example the number of emails that don't get a reply is inaccurate because secondary ticket are added to this number whereas they have been replied to via the primary ticket. We want merged tickets to be regarded as one conversation.

Any news on that?

The reports that you see under the Reports and Analytics will exclude the merged tickets (i.e., secondary tickets that are auto closed post the merge action), and only the primary tickets will be taken into consideration.

I hope this is what you are looking for, if not you can reach out to support@freshdesk.com explaining your use case, and our agents would be able to help you further with it.

we also struggling with the ticket merge function becouse the statistic getting worse. (we are using sometimes tableaou to get a better outcome from our tickets stats and here freshdesk export 2 tickets  and we cant see if its an merge or not)

I think the function "merge" is already the wrong term that freshdesk uses here, because the old ticket still exists and is not merged as actually required.

we solve it with this automation.


then you can at least count out these tickets in the statistics.
maybe it helps someone :-)
I don't think that freshdesk will change in the next years.

Hello , thanks for sharing your insights on this topic. It indeed is helpful if you’d like to filter tickets in the ticket list view. However, if you are using Analytics, by default, the merged tickets would be excluded as  had mentioned earlier. Let us know if you have further queries on that front and we’d be glad to help. Have a good day!

HI having issues with merging and what client can see verse internal agents can see on the ticket.

Sometimes we get a response to an existing ticket but freshdesk creates a new ticket. I thought merging would be an easy way to fix that - but seems I am wrong.

But further the customer loses any visibility on that response that was in the ticket I merged into (as they can not see the merged ticket data it in the destination ticket as the system added it as a private note). Of course the agent can see it but its totally missing from the client view.

I spoke to support and their feedback was

However, the order of conversations is added in a chronological order and would appear the same way for the customer.

My issue is it doesn’t, as that merged information is unavailable for the customer to see (in the destination ticket),

Does everyone else see the same issue?

My only work around is to manually copy the data from the source to destination ticket and not use the merge functionality at all when there is additional information in the ticket, which seems a but crazy.

Any ideas or does this just need some rework by the development team?

Ok, in response to my question above - support came through and It seems the functionality is there to change the comment from private when doing the merge.

You do need to edit each comment being generated manually as part of the merge process, but that is doable for now.

I also asked support to raise the question if maybe the default could be public rather than private or even better if we could set an option in our settings (ie each of us could choose the default).

So no further Reponses required.